With sleek and contemporary branding, this company embraces the ancient ritual of brewing tea and infusions, imbuing it with a premium significance for our current lifestyle

Anassa means queen in ancient Greek but it was also an honorary title, which denoted something exceptional. The word has been redefined by the founders of Anassa Organics, Yanna Mathaiou and Aphroditi Florou, as referring to the sublime Greek earth, a land swarming with rare, exquisite flavours and aromas, blanched with sunlight and anointed with a soil of exceptional texture and substance.

The product selections are mountain tea, verbena and mint tea singly and there are also several blends with cosmic titles, such as Pure Symmetry, Defense, Happiness, Youth and Peace 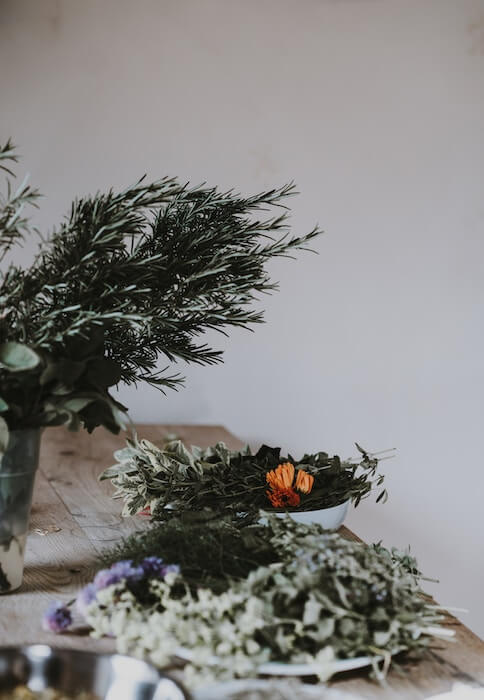 The ritual of brewing tea and infusions is a sedative experience in itself and is part of the seduction of this product. The packaging is sumptuous. A pale grey box of seriously generous proportions is lined with crisp tissue paper, patterned with deer. The contents are in tightly sealed tins, depicting mythological creatures. These are accompanied by a clear glass mug, biodegradable, chlorine free filters to accommodate the tea leaves of your choice and wooden sticks to thread through the filters and support them on the edge of the mug. The mugs have Greek texts on their bases, which are reflected in the ripples of hot water. 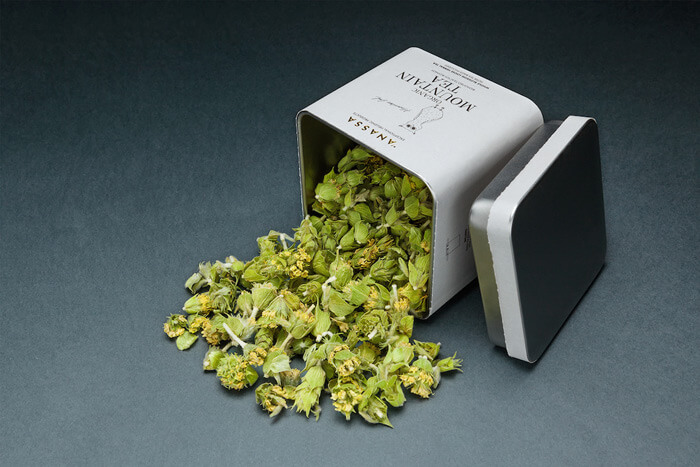 The ritual of brewing tea and infusions is a sedative experience in itself and is part of the seduction of this product. The packaging is sumptuous

The Greek soil hosts 6.500 species of herbs, 1500 endemic to this country. The ancestral habit of collecting them has long been substantiated by scientific evidence of their healing and medicinal properties. Anassa is guided by a panel of academics, on how to collect premium quality herbs.

The producers are small, family owned businesses, distinguished by their organic farming methods, meticulous harvesting and respect for the environment, ensuring no pesticides or chemicals are used and that the earth, where the plants are grown is well rested and full of nutrients. Greek herbs are uniquely enriched with essential oils and the picking, clearing, drying are done manually, retaining flavour and vibrant colour. 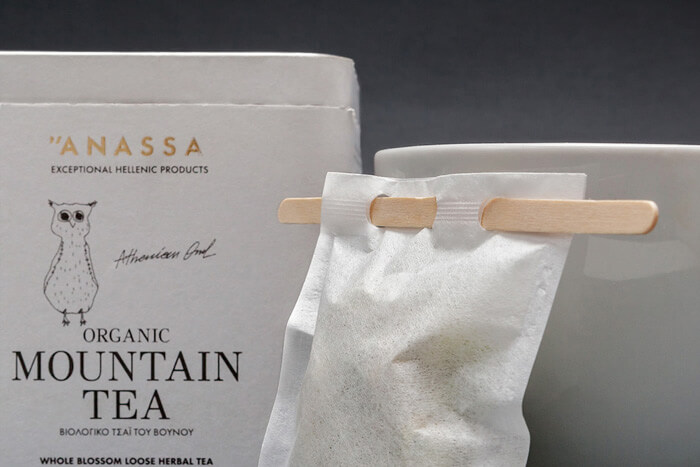 The dittany is peculiar to Crete, the sage from Epirus, whilst the mountain tea, whose herb is Sideritis hails from Mount Olympus and the region of Agrafa.

Each individual herb has a story, whether it is Wild Rose, whose Greek name Kynorodo means dog rose, as its essence of rosehips was actually used by Pliny to cure a canine bite. Or Rosemary, whose Latin root Ros Marinos meaning dew of the sea supports the legend that Aphrodite emerged from the sea, with the actual herb on her sea shell. 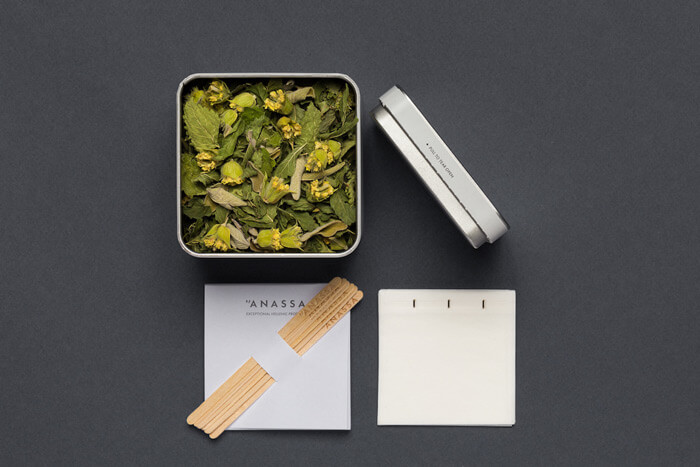 With Anassa Organics, sleek, contemporary branding embraces an ancient ritual, imbuing it with significance for our current lifestyle

Greek Mythology credits the sacred gift and knowledge of medicinal herbs to gods, demigods, nymphs, muses and mythical creatures. From the nymph Philyra, the deity of aromatic herbs, fragrance and recovery who was turned into a Linden tree, which is now named for her, to Hades himself, the feared God of the underworld, who sought a spark of rejuvenation in the nymph Minthe from whom mint was derived. Heroes, such as Achilles and Aeneas were healed by botanical balms, while Hippocrates and Galen prescribed aromatic cures from herbs.

With Anassa Organics, sleek, contemporary branding embraces an ancient ritual, imbuing it with significance for our current lifestyle.