The Serafeim family, adhering to their proven Ouzo recipe and their devotion to the memory of their ancestors, continue their legacy

Apalarina produces three different blends, in addition to mastiha flavoured ouzo. These dominated the memory of the bars of my childhood during the summers in Chios in the early sixties. “Bars” might be an elaboration of what actually existed. A capacious tray sporting a motley assortment of bottles with some angostura bitters, incidentally included constituted a bar. Added to this a plastic ice bucket and maybe a cocktail shaker to add a hint of American glamour.

I was raised in London but my best childhood friend in Greece was Markella. Our fathers were friends and her summer residence in Gridia, in the south of Chios, was a phantasmagorical and charmingly crumbling house. The congregation place was a large tiled veranda, supported by squat cement columns with an unforgettable view of the liquid sea as well as the sea of silvery olive and green mastic trees over which it was perched. Inside the living room, whose walls bore horned and spindly hunting trophies of various deer and goats, was a stout wooden carved dresser with a marble slab on top. This was where the liquor was stored with ouzo dominating.

Our fathers were friends and her summer residence in Gridia, in the south of Chios, was a phantasmagorical and charmingly crumbling house 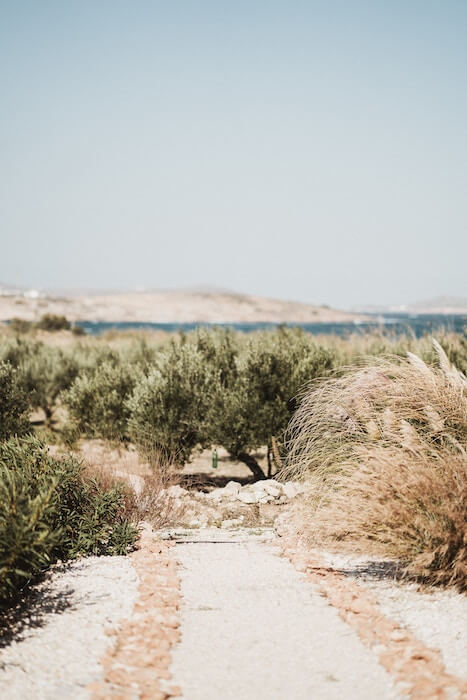 Apalarina’s “The Traditional” ouzo sported a label showing a photo of a group of Chian men, sporting copious moustaches, hats and waist coats and raising glasses with grim expressions, with two small boys at the bottom of the label and some strange naïve musical instruments crammed into the picture. This aperitif had a very strong aroma to it. Most visitors opted for the simple version with the familiar blue striped label and a Chian worthy emblazoned on it, framed by two maps of the island. Another “Meraklidiko” variety, virtually impossible to translate, was created later on and means created with care.

Markella and her parents would fill glasses with the clear liquid and take them to the expectant guests outside. Ice was a challenge at Gridia where there was an unreliable generator and no electricity supply. A large and hefty ice slab was somehow hauled from the car along a narrow cactus impeded dirt path up to the kitchen, where it was lodged into a wood plank cabinet which then reluctantly became a fridge. Markella would pick away at the sides with a real ice pick and a crystal bucket was filled with icy particles to go into the ouzo. These drinks were accompanied by a china appetizer dish in the shape of three cabbage leaves, whose green and white veined compartments offered pickled broad beans, artichokes in oil and coils of tawny smoked herring on toothpicks.

In 1863 an unassuming but visionary man, John Serapheim, began fermenting ouzo in a distillery in the small picturesque village of Neohori in Chios. Harvesting a variety of aniseed from the bucolic slopes of the surrounding hamlets Nenita, Flatsia, Koini and Vouno, he brewed continuously in brass cauldrons until he refined an excellent product.

Even while brewing, John Serafeim was a country man and he had goats to pasture. This daily activity took place in a location called Apalarina which would never have had the requisite significance of stamping the ouzo with its name, had a romantic ingredient not been added to the scenario! John Serafeim also had secret romantic meetings at Apalarina with his girlfriend. The closed society of Chios, sometimes given to gossip and imposing social restrictions on young couples, especially in 1863, necessitated this subterfuge.

Even while brewing, John Serafeim was a country man and he had goats to pasture. This daily activity took place in a location called Apalarina which would never have had the requisite significance of stamping the ouzo with its name, had a romantic ingredient not been added to the scenario!

The original ouzo distillery was founded at the beginning of the twentieth century in the center of Chios town and then incorporated into an “ouzeri” and tavern. The products proliferated and in the 1970’s the traditional building became the company’s outlet and their factory moved to a large plot near the airport. Even this building proudly sports a sign saying “from 1863”.

The seven descendants of the founder produce liqueurs using the bounty of the Kampos plain in Chios, famous for its fruit orchards. The flavours of these are pomegranate, bergamot, rose, tangerine and almond. They also make mastic liqueur from the famous Chian trees as well as rose and flower water for cosmetic use. The Serafeim family, adhering to their proven recipe and their devotion to the memory of their ancestors, continue their legacy.