Meet the historic Tombazis olive oil, which has been garnering awards since 1900, and its producer, Aristotelis Panagiotaros, who continues this hallowed tradition in a grove whose history provides a snapshot into the development of the modern Greek state. 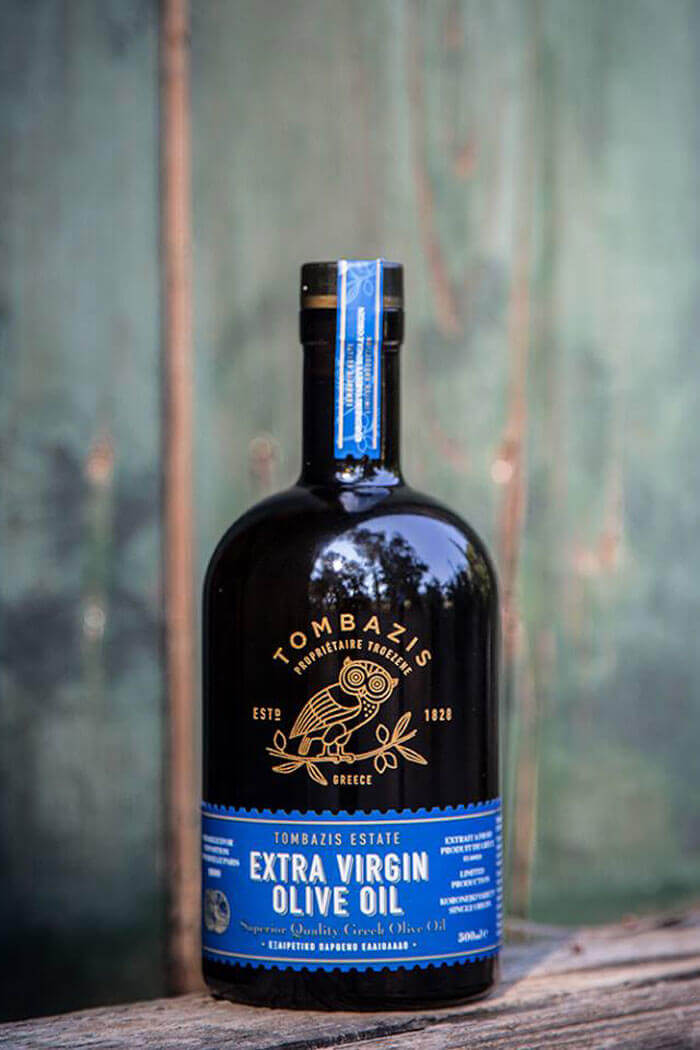 Other than writing the descriptions of our premium products, one of the most gratifying components of A Magic Cabinet is receiving requests from producers themselves for a presence on our site. This is how we discovered this single variety extra virgin olive oil with its exceptional spicy aroma.

The Tombazis estate has a cultivated area of 7,5 acres and boasts 1240 olive trees of the Koroneiki variety. The verdant grove is owned by Aristotelis Panagiotaros and is located in Galatas, Troizinia in the Peloponnese. 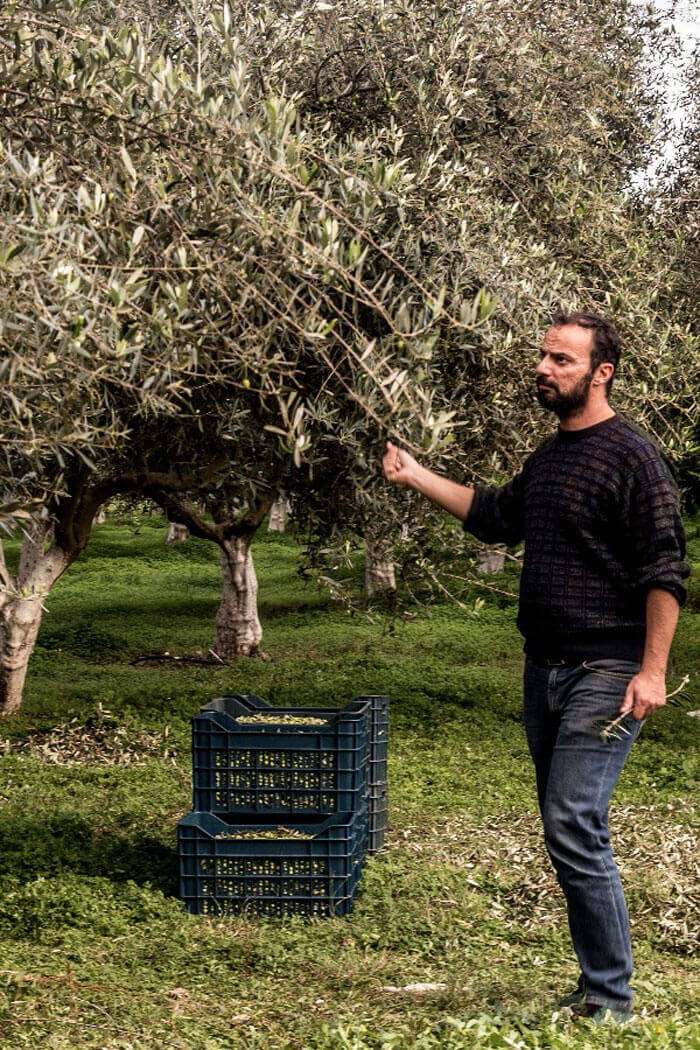 The olives are harvested in early November, when they are not quite ripe so the polyphenols levels can remain high· They are placed in specially ventilated baskets so they can breathe and not be crushed and at the end of the same day are taken to the olive press.

The oil is filtered immediately with minimal use of water and stored in stainless steel tanks. It is packaged in a protective dark glass bottle with arresting graphics and a deep blue label.

The olive grove is watered but there are no chemicals used. The trees’ branches are cut with a special grinder which adds nitrogen to the soil. A natural ground cover of grass maintains a cool temperature for the trees which are also benefit from local beehives. 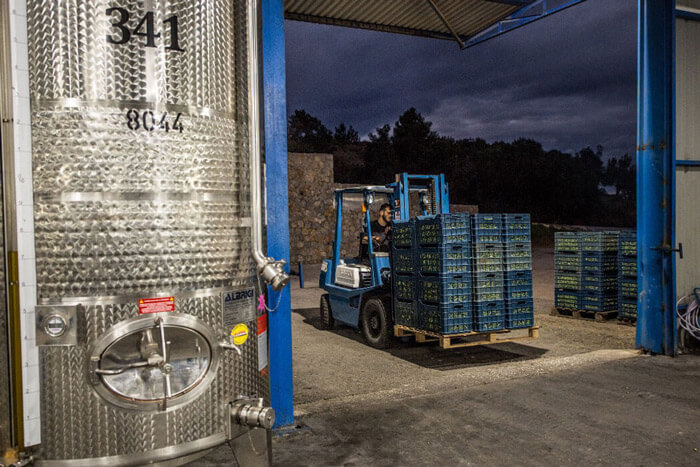 The oil is filtered immediately with minimal use of water and stored in stainless steel tanks. It is packaged in a protective dark glass bottle with arresting graphics and a deep blue label.

In 1978, the historic Tombazis estate was bought by the Panagiotaros family. Aristotelis had spent his childhood summers there and has loved it ever since.

He studied as a chef in Florence and continued with patisserie studies in Paris. His culinary journey and the passion for quality, instilled in him by his Italian and French instructors, made him the professional he is today.

In 2011 he also opened a chocolate shop in central Athens.

It took patience and self-confidence to advance his product. “Anyone involved in gastronomy has to have respect for nature and really love what he does”, he says. 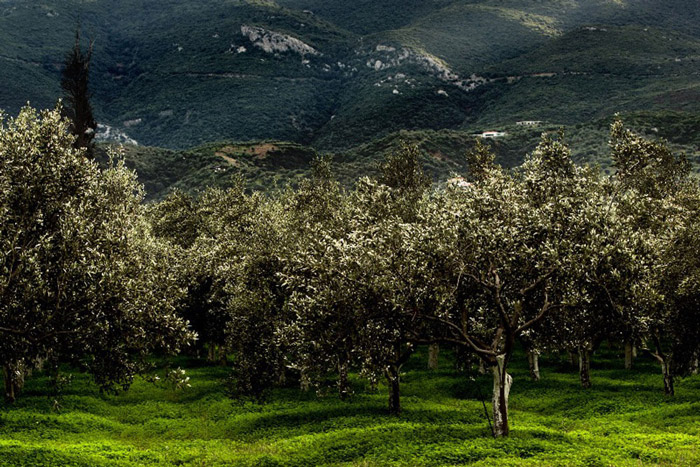 “Anyone involved in gastronomy has to have respect for nature and really love what he does”, Aristotelis says.

Galatas is opposite the island of Poros and the area has a gentle and soothing climate with little wind.

In 1828, owner of the estate, Admiral Manolis Tombazis, gave all his money and four ships to aid Greece’s struggle against the Turks.

The grove was initially full of citrus trees, but a sudden catastrophic plant disease meant that all the family’s knowledge had to be diverted to olive oil production instead. 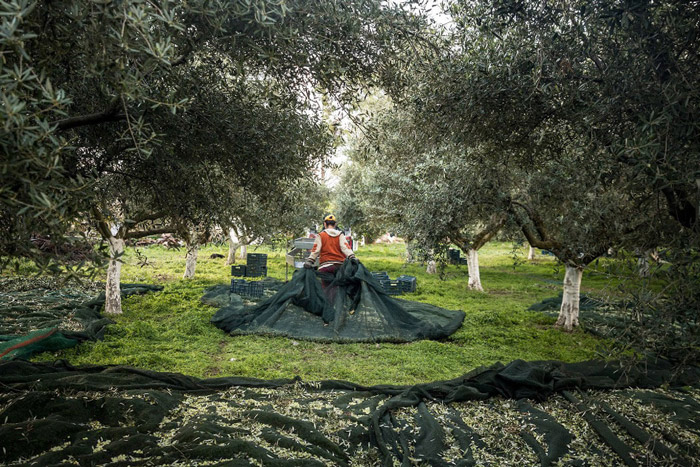 He aims to make Tombazis Estate visitor friendly, not only to enhance agrotourism, but because of its historic importance. Visitors will be able to see a stone olive press from 1900 along with many artefacts from the 1821 Revolution. He would also like to organise a number of activities with which to participate in the bicentennial of the Greek Revolution.