Meet the ingenious brand, which is based in Tinos and manufactures natural handmade soaps with exceptional ingredients and aesthetic

Ena Karo manufactures handmade soaps, molded in various shapes and sizes from only the purest essential oils of olive, sweet almond and apricot kernels, as well as luxuriant shea and cocoa butters.

Georgia Zilou established her brand in 2015 and they are zealously introduced to our site by one of our celebrity bloggers Mareva Grabowski, who is the co founder of Zeus and Dione and the first person to set eyes on my triplets, discounting the astonished medical team that delivered them.

Georgia’s family would regularly refer to “ena karo” meaning a cartload of usually followed by the word “troubles”.

The term “ena karo” meaning a cartload is generally followed by a pejorative term such us ‘problems’. This negative phrase was frequently used by Georgia’s family,so she decided to reverse the energy and name her creations after it. 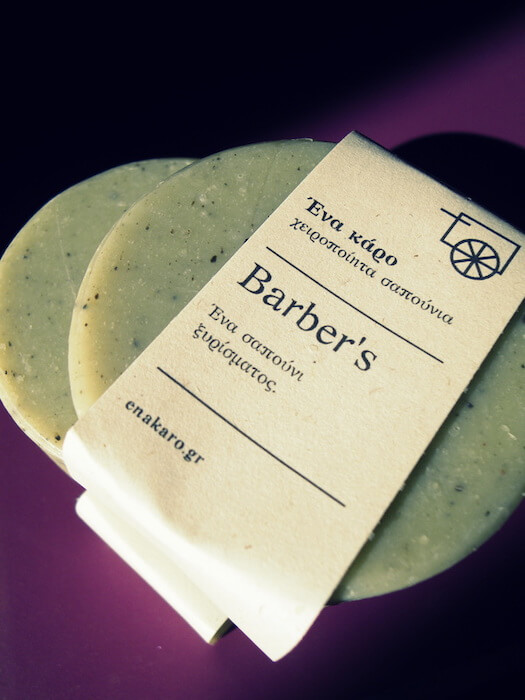 Ena Karo manufactures handmade soaps, molded in various shapes and sizes from only the purest essential oils of olive, sweet almond and apricot kernels, as well as luxuriant shea and cocoa butters

The soap’s ingredients include poppyseed, beeswax, herbs and nettles, goat’s milk, aloe, pumpkin and green clay. There is also a bar based on cookies derived from cocoa butter, cinnamon, clove and orange oils and a felt one made from sheep’s wool which has a peeling effect.

Georgia’s creativity is matched by her embrace of nature, fanatically opposed to animal testing, she studies the best combinations of aromatic herbs and works with a professional chemist who clinically tests the soaps. They take a month to mature, for the water and caustic soda to evaporate, allowing a longer lasting bar with luxuriant lather. 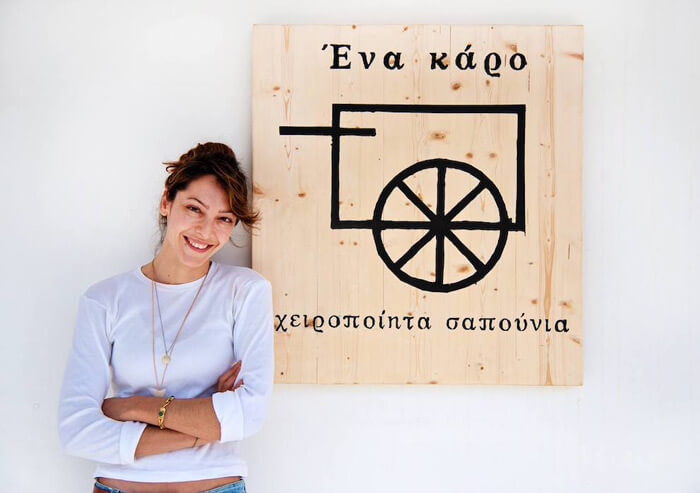 Georgia did not have any background in cosmetology but instead studied interior design at Akto in Athens. Soaps were always her passion and she took the decision to make a business out of it crafting them, experimenting by selling them at Athens bazaars and getting feedback from friends.

In 2012, she and her husband Andreas decided to move to the Cycladic island of Tinos and in 2015 Georgia set up Ena Karo.

She was guided by the herbs and spices she preserved in small jars and then imagined how to blend these herbs with base oils and then perfume them with essential oils. 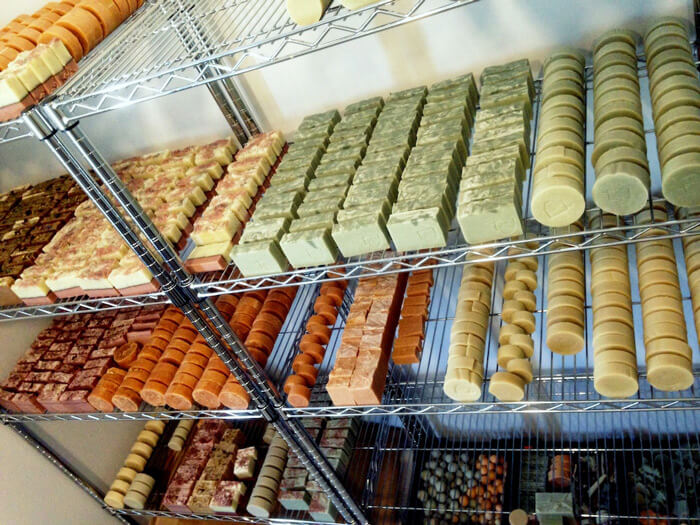 The couple lives in Tripotamos, an amphitheatric village with stone steps and arches named for the three rivers that surround it. The whole white washed village is constructed as a castle, with houses wedged next to each other. There is a sweeping view of the port but cars rarely visit and the atmospheric character of the place nurtures her creativity. The village nestles under the impressive bulk of Exomvourgos, a huge mound of rock that dominates Tinos.

The herbs blended into the brand’s soap derive their robust flavour and healing properties from their Cycladic roots, where the paucity of rain reinforces their flavour.

Sage and nettle are found in Apigania, whilst in the town of Tinos and in Tripotamos itself, chamomile and rosemary abound. Lemon balm is found in the north and east and lavender near the village of Kardiani.

Tinos, with its extravagant topography and lush plains, offer Georgia peace and inner calm, as she feels is a place where she can leave her key on the door and sleep with the windows open.