In those full and carefree days before lockdown, on which I look back with a searing nostalgia, I would explore the varied neighbourhoods of central Athens with eagerness and curiosity. Koukaki was one of these: streets wide enough for access but narrow enough to suggest leafy village life, multifarious shop fronts attracting the passer-by with startling colour or seductive aromas of food and coffee.

When I went to collect our items from the loom atelier Fibra Fibra, from a locked down Koukaki, this liveliness still permeated the stillness. 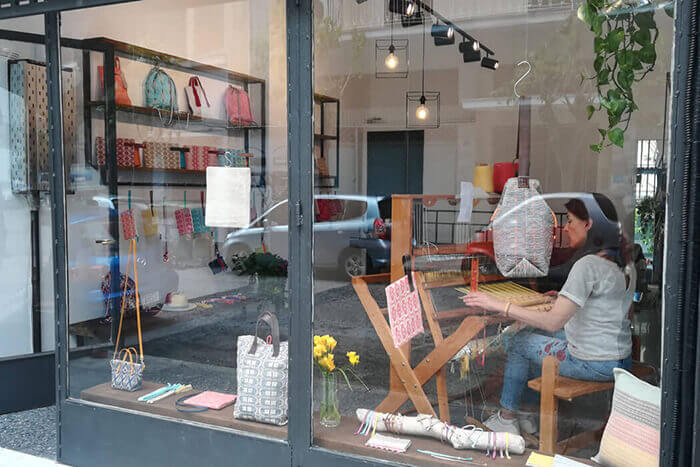 Fibra Fibra is based in the Koukaki neighbourhood of Athens, in a vibrant and constantly evolving area that is full of artisanal workshops.

I heard of them first from a friend in Andros and then from several other sources.

They offer a plethora of products, such as handbags, backpacks, tablet cases and decorative cushions, and achieve a perfect blend of traditional technique with contemporary design.

The name comes from the Latin word for fibre, and the repetition of the word reiterates the partnership of Elena and Yiota who, like the warp and the weft, the two basic components of weaving, collaborate to produce their beautiful creations.

The argalios plays the role of central element inside the workshop retaining a prominent position and it often happens that passers-by stop and watch Elena and Yiota weaving through the window.

Elena worked as a journalist for more than ten years and Yiota was a tour guide on Santorini’s volcano. They met in a weaving class in Athens and became friends. It was their acquaintance with the art of fabricating with the argalios that made them realize, each for different reasons, that it was something that they wanted to do professionally. A decision that would ultimately lead them to create Fibra Fibra. 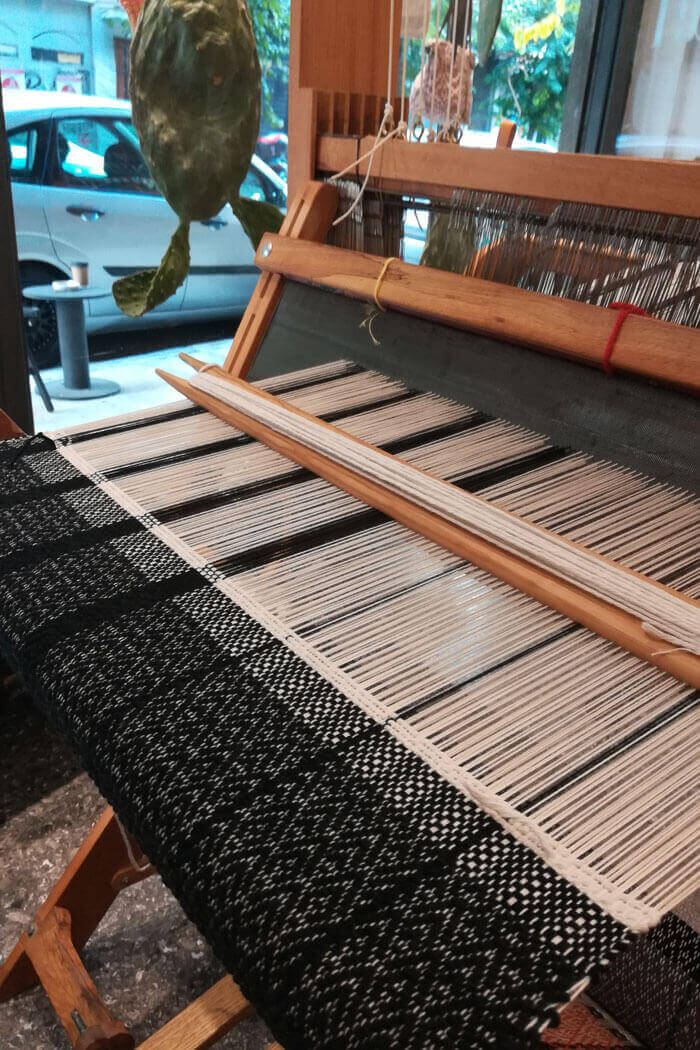 The argalios plays the role of central element inside the workshop retaining a prominent position and it often happens that passers-by stop and watch Elena and Yiota weaving through the window.

Yiota had vague childhood memories of her grandmother from the island of Kimolos, sitting at the loom plaiting textiles. Traditionally, all women used the loom as a customary housekeeping skill. Yet Yiota’s grandmother was a professional weaver, meaning that she was the one who knew how to set up the looms, knew the patterns and helped the other women weave. It was a skill and an accomplishment that not many women shared, and which, as industrial textiles became available, became forgotten.

Elena on the other hand, had no family memories or stories to remember in that context. However, for a long time she had the yearning to weave and immediately she felt an inexplicable familiarity with the art of the argalios. The fascinating coincidence is that her family name, Lanaras, means the person who processes the wool into fibers.

Fibra Fibra is based in the Koukaki neighbourhood of Athens, in a vibrant and constantly evolving area that is full of artisanal workshops, which were previously dominated by car repair shops. It is situated in an old car upholstery workshop and it served as an inspiration for Elena and Yiota as the industrial environment functioned as a counterbalance to the traditional loom.

The argalios plays the role of central element inside the workshop retaining a prominent position and it often happens that passers-by stop and watch Elena and Yiota weaving through the window. The young people ask about “this curious apparatus”, while the older ones get excited as they remember their own mothers and grandmothers sitting on the loom.

Elena and Yiota create everything from its initiation and they work together during all stages of production. While each one has a favourite weaving technique or style, they always friendly exchange opinions and ideas.

When they start a new design, they always hold a concept in mind, but they have learned to allow themselves to be guided by the weaving itself. The textile or the technique often decrees them to exciting new forms, combinations and colours. For this reason, every object they create is utterly unique, never repeated twice.

The most exciting part of the process is the moment after the weaving ends when they unreel, and the textile is revealed.

That the city of Athens can still foster workmanship such as this, is an affirmation of the creativity of today’s artisans. It is also a reflection of the craft traditions of Greece which we are so proud to honour and to offer.