Grandma Stella is a proudly continuing family business, founded in 1925 in the village of Stipsi, in the North Eastern Aegean island of Lesvos. The owner, Stelios Tzanerikos, aims to promote his homeland’s biggest food export, olive oil.

Grandma Stella, a 100% organic extra virgin olive oil, has a fruity yet spicy flavour, a golden colour and a subtle aroma.

Stelios prizes quality and flavour above all else. The arresting packaging is what first attracted me when I discovered this oil at a food fair; the bottle is pleasingly curved and the label depicts Stelios’s grandmother, who is very meaningful to him. 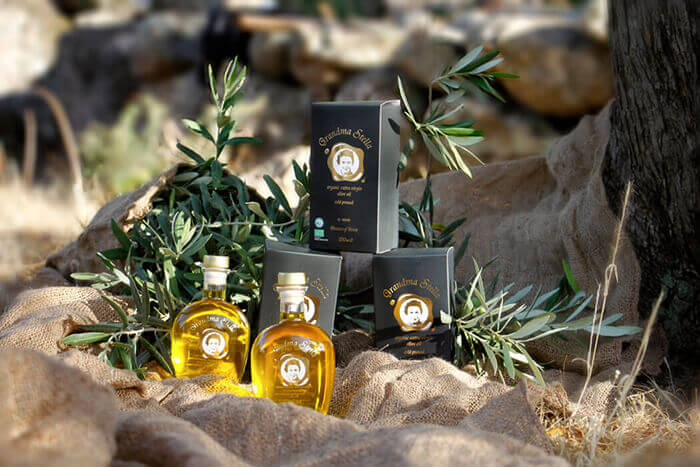 The organic extra virgin olive oil is entirely produced without the use of chemicals from organically cultivated olives, which are harvested by hand. The oil is extracted from the olive paste at a low temperature and under strictly supervised conditions.

The olives of the variety Adramitini known also as Aevaliotiki or Fragolia, yield Grandma Stella oil and a fifth of Lesvos’s numerous olive groves grow this type of olive. Their origin is from the gulf of Adramition in Asia Minor.

Grandma Stella, a 100% organic extra virgin olive oil, has a fruity yet spicy flavour, a golden colour and a subtle aroma.

Harvest begins in late October and lasts four to six weeks. The brand’s olive mill is next to its groves and the fruit is moved to the press in special sacks made from natural fibres. After extraction, the olives are kept in cool conditions. From harvest to extra virgin olive oil, the process takes no longer than 24 hours.

In the summers of the early 90s, Stelios spent his holidays with his grandparents, Stella and Fokionas. He observed their rural daily routines in the groves and pastures, harvesting olives and working the land with the horses. He relished their traditional Greek food, which always included their unique olive oil.

Stelios worked as a plumber for a number of years but the economic crisis forced him to change direction and focus on the family olive groves. He was encouraged by a friend from abroad who raved about the oil after tasting it. 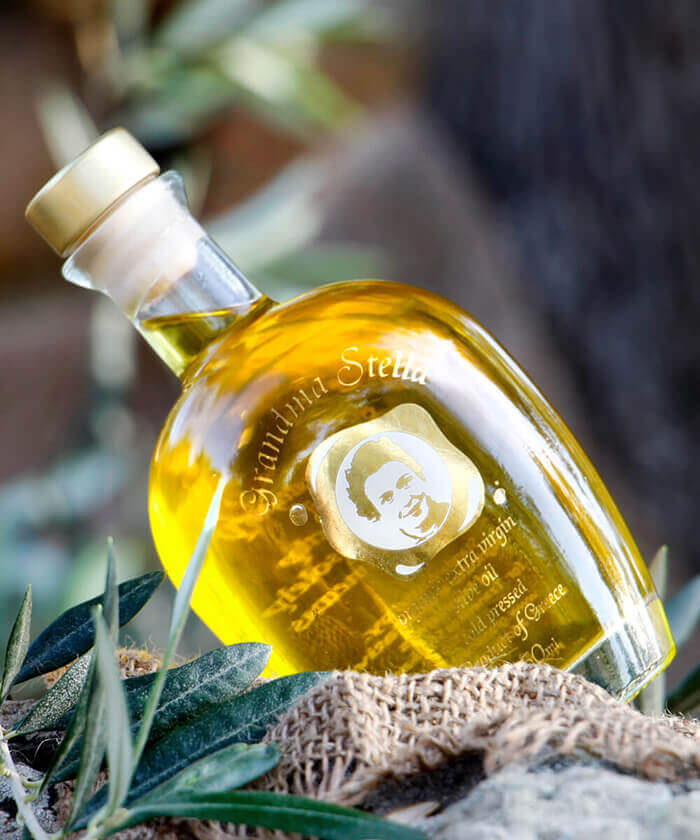 The first batch of olive oil produced was special for Stelios, as he could physically see his dream becoming a reality. He will never forget the beam on his grandmother’s face after she saw her image and name inscribed on the bottle.

Lesvos is a vast olive grove. The brand produces oil exclusively from their olive groves of 1500 trees, which are right next to a traditional olive press, built in 1925, but equipped with all the latest machinery.

Grandma Stella is in the village of Stipsi, in central Lesvos. Stipsi is a traditional mountain village. It is named after “stiptiria”, otherwise known as argillic clay and potassium sulphate, an endemic characteristic of the local soil that is used to produce paints and treat leather products.

Lesvos is a vast olive grove. The brand produces oil exclusively from their olive groves of 1500 trees, which are right next to a traditional olive press, built in 1925, but equipped with all the latest machinery.

Culturally speaking, Lesvos and Stipsi are hosts to treasures. The Museum of Industrial Olive Oil Production hopes to promote the island’s heritage, as it formed an integral part of its wider architectural, social and cultural history. At the same time, the village has two beautiful buildings, the Church of the Assumption, built in 1805, and the Church of the Holy Trinity, built in 1924.

Producing Grandma Stella olive oil in these circumstances is not always easy. The hardest part of Stelios’s job is to navigate the unpredictable weather conditions. He is, however, gladdened by the fact that people want Grandma Stella oil to be a part of their daily life.