Old houses with cathedral ceilings were packed with coiled carpets and kilims, inlaid boxes, antique ceramics, bottles, swords and other wonders which were both a visual buffet and also a cultural lesson.

I had promised my brain a cleanse, a keenly anticipated pause from intruding thoughts and debilitating anxieties. Morocco was my choice for this mental vacation which I considered bustling enough to be alive yet tranquil enough not to be exigent.

From the time I arrived there, time oozed by like a thick and gradual syrup. I immediately felt a great soothing, sipping steaming glasses of fragrant mint tea, lulled by the peaceful trickle of the fountain in the centre of every riad’s courtyard. 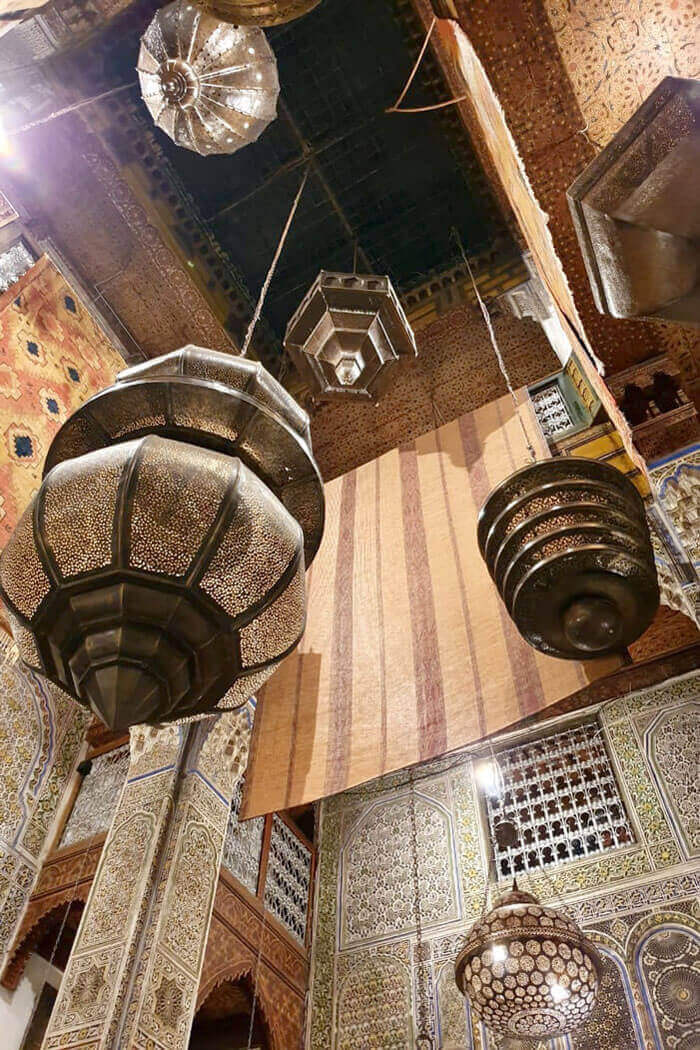 The quotidian timetable suited me perfectly. Pale daylight reluctantly crept over the huddled buildings of the medinas at a late morning hour, and the souks became more animated as the day progressed when the sun became stronger. The famous Jemaa el-Fnaa square in Marrakesh, like myself, was livelier at night, displaying steaming food stands, snake charmers, monkey handlers and peddlers of dubiously accredited aphrodisiacs and other cures and enhancers.

All the interiors of buildings seemed suffused with an amber glow. Weighty chandeliers of filigreed bronze were imposingly suspended from carved cedar wood ceilings. Illumination was wanting, either by lanterns or by candles whose light bounces off brass vases and pots. Everywhere were ceramic pots, vividly coloured, bulbous and large, inlaid with camel bone leather and silver.

The restaurants in Marrakesh were fantastical. Luscious courtyards with tranquil ponds and burgeoning plants, dining rooms screened and separated by carved wooden panels, tiled floors, and braziers blazing against the evening chill. 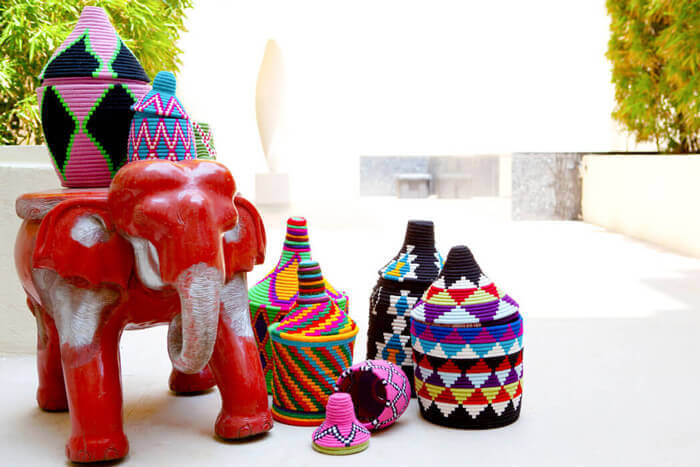 Fes, a much older city, had a more lugubrious energy, its narrow streets withholding mysteries housed behind studded wooden doors whose size and style signified the owners’ social status. Before street signs were formulated, triangular tiles of blue and viridian green were embedded in the beige plaster walls denoting addresses.

Here you see trellised balconies reminiscent of Andalusia as balconies are not a feature of Islamic architecture which permits tiny windows for decoration not for observation. The buildings also have soaringly high walls which ensure no one could look inside their secluded interiors, thus screening the women from view.

For an avid rambler and potterer such as myself, the real treasures of Morocco are its souks, the markets, nestled within the walled and labyrinthine maze of streets and allies, the Medina. 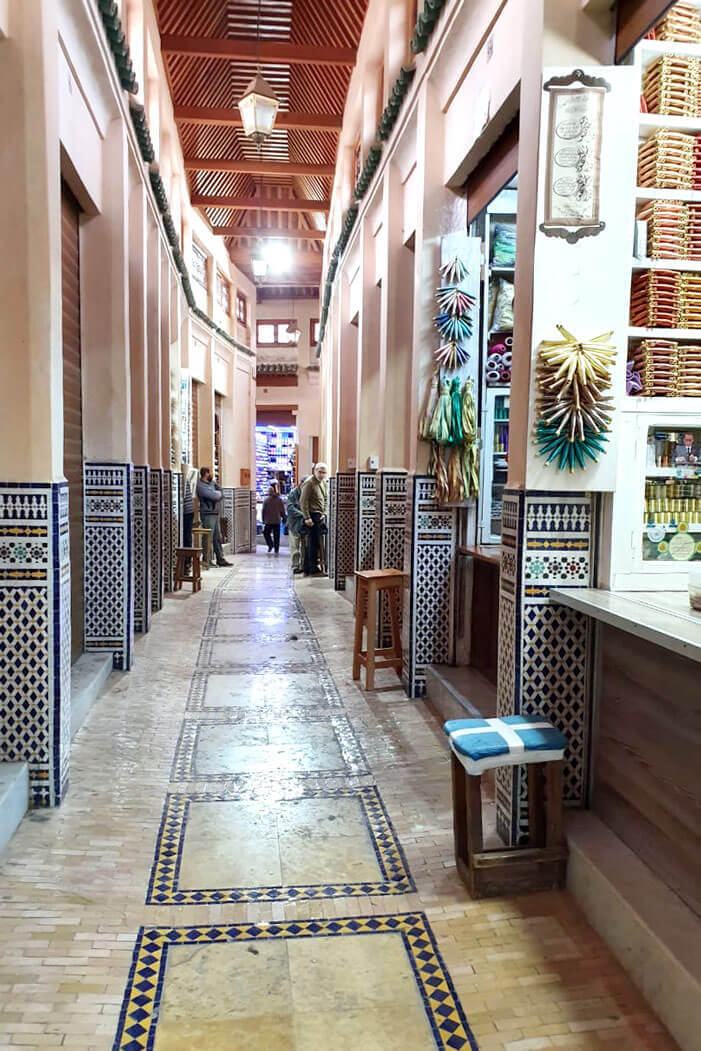 For an avid rambler and potterer such as myself, the real treasures of Morocco are its souks, the markets, nestled within the walled and labyrinthine maze of streets and allies, the Medina.

In Marrakesh, the small shops were suffocatingly close to each other, sporting woven baskets, squidgy leather slippers in mustard yellow, turquoise and pink, studded with sequins reflecting the sunlight. Other stalls offered pans, teapots, artworks, lanterns and trinkets of bush hammered brass or aluminum. Kaftans, napkins and placemats filled others. There were palaces crammed with antiques, art galleries and apothecaries touting herbs, teas and the local argan oil.

In the food section, women kneaded pale dough and then slathered it with a mix of harissa and red peppers, folding it into neat pies. Street food followed, sizzling, smelling of barbecue, filling the streets with an acrid smell.

Fes is proud of its past textile tradition and its medina was a jostling warren of shops where clustered artisans wove, welded and stitched.

Old houses with cathedral ceilings were packed with coiled carpets and kilims, inlaid boxes, antique ceramics, bottles, swords and other wonders which were both a visual buffet and also a cultural lesson. Much of the Medina has been restored with ochre tiled floors and refurbished stalls disgorging luscious fabrics and blindingly beautiful yarns.

The food markets of Fez were visually expansive; smooth and wrinkled olives glistening in oval baskets, fruits and vegetables piled high into pyramids, sacks bulging with pulses, mounds of raisins and nuts, tins of powdered spices, stalls with coral fish like red mullet but shaped like eels and butchers offering all meats including camel heads. 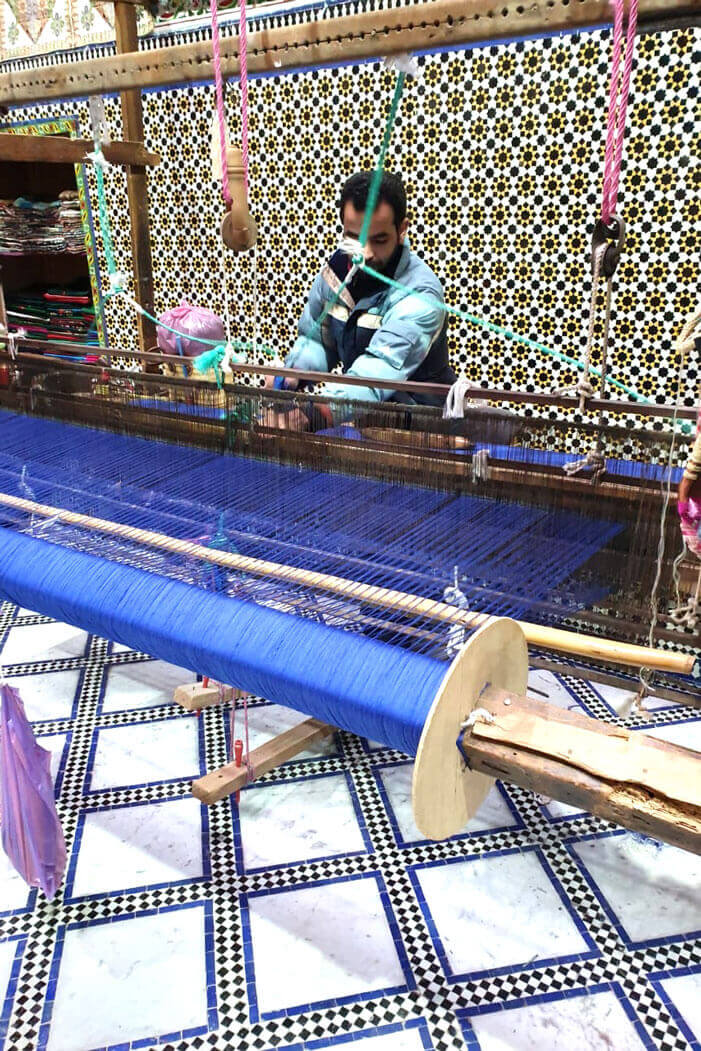 Fes is proud of its past textile tradition and its medina was a jostling warren of shops where clustered artisans wove, welded and stitched.

There was also the leather section where merchants touted deliciously smooth jackets and capacious carpet bags which I had always hankered after as a teenager on London’s Kings Road. The market was divided into enclaves. Narrow storefronts displayed embroidered tableware, other tiny outlets disgorged rolls of gaudy fabrics. 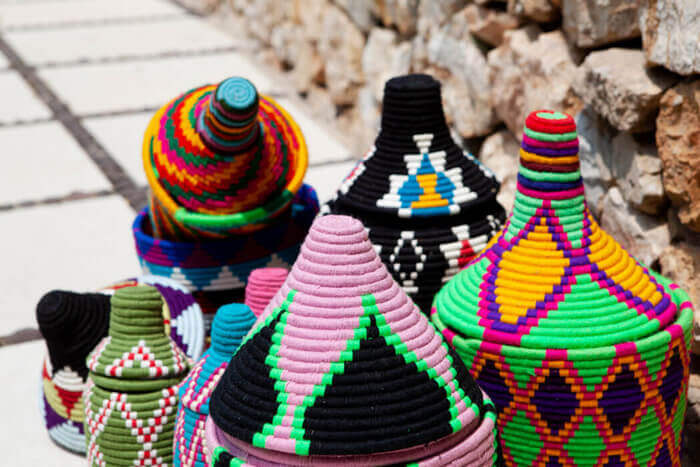 Entering yet another sequestered entrance shielded by a massive wooden door, I stumbled into the lofty central chamber of a house with walls showing several storeys above us and a shiny tiled floor.

The main chamber of the workshop Tisserand de Fes was dominated by a large and wide wooden loom. Working adroitly with hands and feet, the artisan wove a lavender blue fabric. On the upper floors, narrow cubbyholes held multicoloured kaftans of the softest cotton and sleekest silk.

Going downstairs I glimpsed the baskets sitting on their shelves. These are woven from a flowering plant Cladium Mariscus, a type of sawgrass, found in the Guercif area which is watered by many rivers. Local women work in a co-operative weaving the baskets with art and imagination.

I am immensely proud to introduce A Magic Cabinet’s first offering from my Moroccan travels.