It was on the relatively remote island of Pano Koufonissi where I chanced upon Miterra Oil. As a guest on a boat cruising the Cycladic islands, we paid a blindingly sunny morning visit to the smaller island of Kato Koufonissi where in the company of Austrian friends, I clumsily stumbled up a steep and rocky hill which they ascended with the agility and mountaineering prowess of goats. Despite my painful awareness that a surefooted uphill sprint was no longer within my physical abilities, I was rewarded by arid beauty and unbelievable views. Then came a more social and less physically grueling trip to the larger Koufonissi consisting of white washed houses, a port and a sunset bar culled from a Greek island Instagram shoot.

In a grocery store I discovered this oil. Minoan Gaia is a family business established in 2014 by Marigianna Chalkiadakis and her brother Nikolas Chalkiadakis in Heraklion, Crete. They produce extra virgin olive oil, thyme honey and rusks using pure Cretan ingredients. The founders’ vision is to promote Cretan gastronomy and premium local products worldwide, narrating and disseminating the story of their birth place. 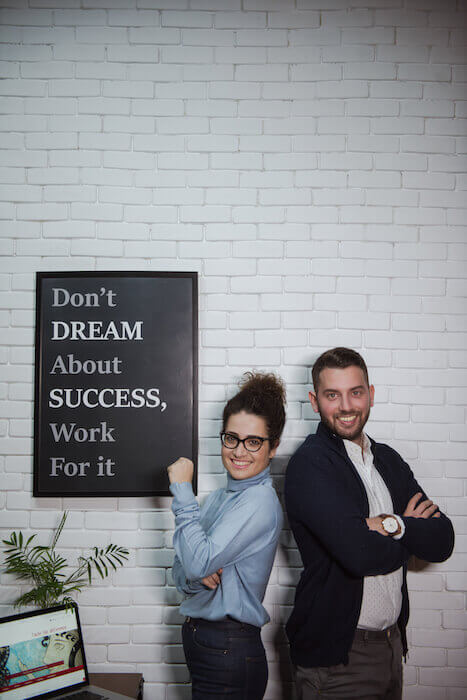 Minoan Gaia is a family business established in 2014 by Marigianna Chalkiadakis and her brother Nikolas Chalkiadakis in Heraklion, Crete. The founders’ vision is to promote Cretan gastronomy and premium local products worldwide, narrating and disseminating the story of their birth place

Miterra olive oil, made from the Koroneiki variety which abounds in Crete, stands out for its unique fresh flavour, its distinctive aroma and golden green colour.

The brand draws inspiration from Minoan civilization, especially the Mother Earth Goddess, hence the brand name which means mother in Greek. The theme throughout their branding is the ritual Dance of the Mother Earth Goddess, featuring three female figures in motion, which can be found on a small pot housed in Heraklion’s Archeological Museum. The figures depicted are abstract and schematic. Their company logo is inspired by one of the symbols of Linear B which is a syllabic script used for writing Mycenaean Greek, predating the Greek alphabet by several centuries. Miterra oil is exported to several countries. 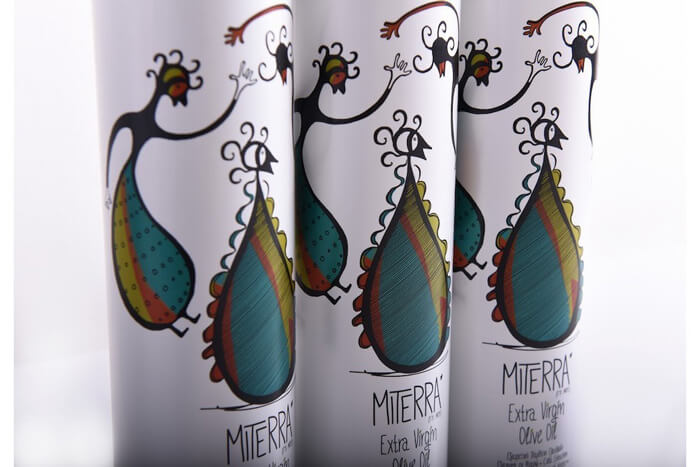 Miterra olive oil, made from the Koroneiki variety which abounds in Crete, stands out for its unique fresh flavour, its distinctive aroma and golden green colour

Nikolaos studied economics and management engineering and Marigianna architecture, marketing and branding. At the end of 2013, with Greece in the grip of a severe economic downturn, they faced the dilemma of staying in Greece or leaving the country. Although many of their friends had prospered abroad, they decided to stay and create something new. They established the company in January 2014. In the beginning they were naturally anxious as they were venturing into the unknown.

Nikolaos and Marigianna were raised in Heraklion and spent their childhood summers in the village of Choumeri, close to the city. They both have vivid memories of their grandmother’s cooking and the taste of fresh olive oil crusted with salt and oregano on a rusk, a typical Cretan snack. 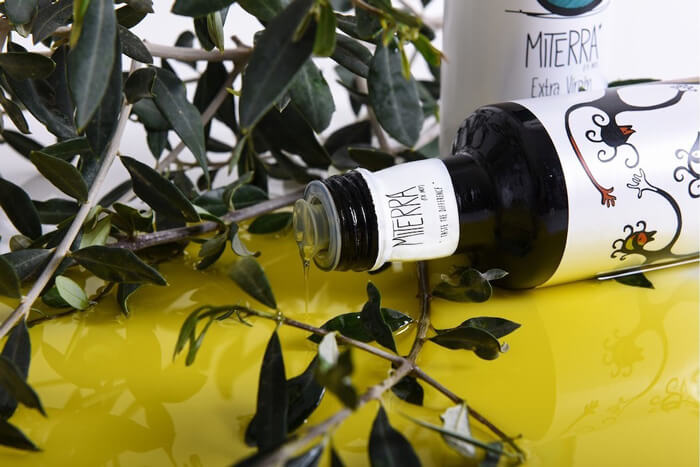 Minoan Gaia is Heraklion based, while some of their olive groves are in Choumeri. They source oil from other producers as well but supervise the whole process. Crete has a benign Mediterranean climate with mild, rainy winters and sunny summers.

“The fine climate is not enough” Marigianna points out. One has to respect the harvest and packaging ritual, which must take place in November in order for the oil to retain its valuable resources. The olives must then be placed in plastic lugs and be sent into production avoiding any exposure to heat. After a thorough wash, the stones and skin are crushed thus creating a paste which goes through a cold fermenting process. Set up to 28 °C maximum, it allows the olive oil to retain its high nutritional value.