Vissino is sour cherry in Greek, a fruit indigenous to many of the Cycladic islands, and indeed to most of Greece. It is widely used as a syrupy delicacy named “desserts of the spoon”, which come in a range of flavours, pistachio, rose petal, mandarin, quince, lemon, orange, most of which glide oozingly onto the tongue and are sickly sweet. Vissino is a felicitous exception as it adds a shot of tartness to the rich cherry flavor.

Kostas Prekas, an innovative and enthusiastic pioneer of traditional Greek products, especially from his native island of Syros, has taken the fruit and distilled it into a smooth liqueur, with a tang of cinnamon blending with the wild cherry. The bottle and its label add an antique charm to the produce and promise a drink gleaned from a recipe of his grandmother.

Prekas expanded the culinary heritage of Syros which was limited to loukoumia, San Mihali cheese and halvadopitta, a chewy nougat encased in a rice paper crust, to include the preserves of local housewives, sun dried tomatoes, tangy capers and liquor made from syrup

During his high school apprenticeship as a waiter in Syros, he became inspired by cooking. In 1994, he opened a food store presenting delicacies from all over Greece, which posed a degree of risk. Greece in the 1990 prized all things foreign and dismissed local products as second rate. The first beverage of choice was not ouzo but whiskey.

Fueled by his innate enthusiasm, he drove a vintage car all over the country, consulting village elders on which outstanding and unique products to select. These were showcased in a tiny space from which he then graduated to an establishment on Chios Street, the iconic, bustling center of Syros’ market life, vibrant and arresting to this very day.

The town of Hermoupolis is an outdoor museum, with architectural grandeur and grace and Chios Street, with its wide marble flagstones smoothed by time and history, is the bustling epicenter of it, giving the historical town a contemporary vibrancy 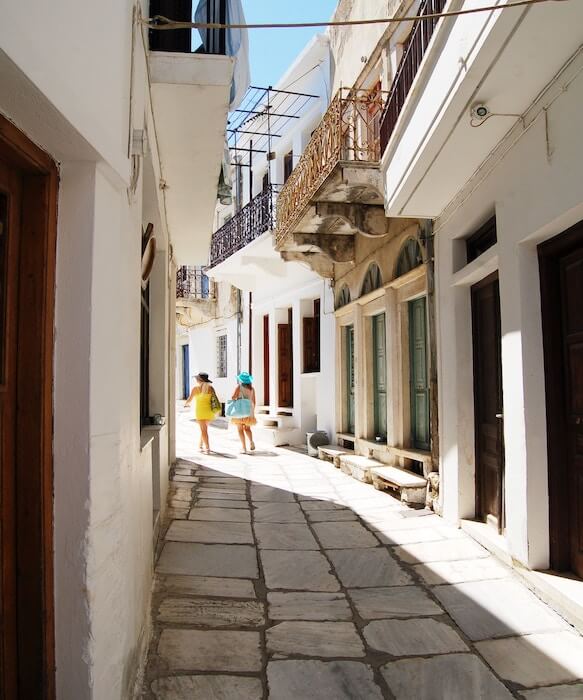 From 1821 refugees began arriving in Syros after the struggle for Independence from the Ottoman Empire, from Psarra, Chios, Samos and Kassos. They transported with them their expertise in shipping and commerce and Hermoupolis became the new port of Greece.

The town of Hermoupolis is an outdoor museum, with architectural grandeur and grace and Chios Street, with its wide marble flagstones smoothed by time and history, is the bustling epicenter of it, giving the historical town a contemporary vibrancy.

Kostas Prekas’ store today combines a contemporary selection of cheese, pickles, capers, rusks, olive oil, sweets of the spoon, honeys, pastas and preserves. He has wedded his passion to make traditional Greek products relevant to today’s cookery trends while retaining in the cool interior of brimming shelves and refrigerated cabinets, a taste of history that mirrors the street outside and the gracious town that embraces it.