Why dog collars are the highlight of Ipplito’s creations, the thriving fashion brand Pavlina Papailiopoulou created in downtown Athens

Almost every curated product in A Magic Cabinet is a personal discovery showcased, because of its quality and its feel. However, Ippolito created with inspiration by Pavlina Papailiopoulou, was very well known to a person who knows this site intimately, and she imparted her enthusiasm for it. The showroom is located in a commercial street, in the centre of our capital city of Athens.

Our mother wanted to stroll there herself with me on my lead, but this excursion was aborted because there is a resident dog there, strangely named Gepetto, who is the company mascot. Bella and I, are not adept at socializing in small spaces so our mother had to go alone. Talking of strange names, I had better explain ours. I am named for Maximus the hero of the film Gladiator, because of my supposed valour and Bella Swan is named for the heroine of the Twilight series, who fell in love, somewhat unfortunately, with a vampire.

But I digress. Ippolito makes handbags that are soft and slouchy, holding all the nonsense that women carry with them all day and yet are elegant enough to use in the evening. A highlight of Ippolito’s creations are its dog collars.

Ippolito makes handbags that are soft and slouchy, holding all the nonsense that women carry with them all day and yet are elegant enough to use in the evening. A highlight of Ippolito’s creations are its dog collars

Pavlina launched Ippolito in 2009, one of the first Greek handbag brands by listing the essentials of what a beautiful, but practical, bag should feature and cost.

She grew up in Plaka, which is now glamorous and gentrified, but which in the 80’s was fairly hazardous and, thus, her ramblings outside were limited. Attending Hill Memorial School, an establishment that still exists today in a traditional Athenian building, she recalls being a distracted and antisocial child, whose one passion was drawing on whatever surface offered itself, even if it was a drawing done by her sister or a painting belonging to her mother. Not only socially withdrawn, she also wished to distance herself by wearing unorthodox clothing.

After following a fashion design intensive course at the renowned Instituto Marangoni in Milan, she then interned for Bottega Venetta. Even though she was hired as a junior designer, she felt the need to leave Milan.

Briefly visiting New York to research possibilities, she had some successful encounters but decided to return to Greece and apply her talents at home!

The brand is named after the father she lost when she was a baby. She has no conscious memory of him, yet feels his presence and inspiration always as an omnipresent guardian angel. Her first shop opened on the ground floor of her family home. 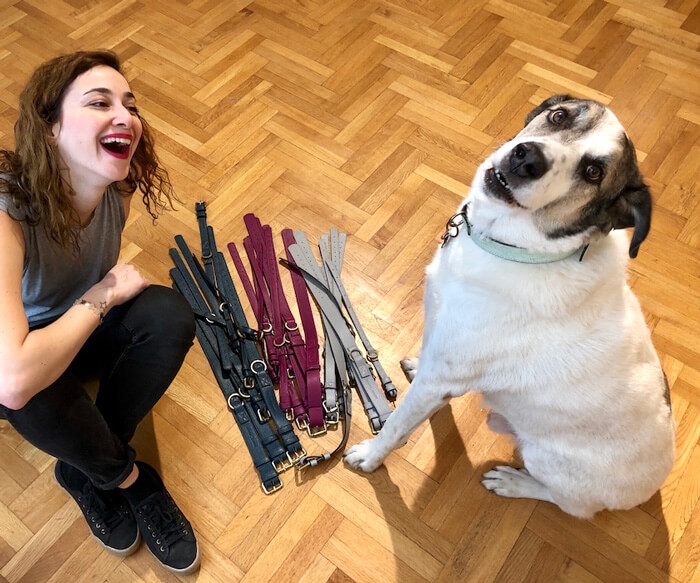 Ippolito is a company rooted in city life, its creator has worked with Tsumori Chisato and has exhibited abroad yet her loyalty to Athens remains firm

The dog collar collection of Ippolito has an equally tender and touching storyline, which is a bit like our rescue story line. Pavlina always had a propensity for pets. Geppetto was an adorable puppy, abandoned in the Attica countryside and after a few day’s hesitation by Pavlina, worried about the encumbrance of yet another pet, he was scooped out of his isolation and installed as the house and shop mascot. Sadly, he was diagnosed with Kalazaar, a potentially fatal canine disease. He is thankfully in remission but the proceeds of the creations he inspires go rightfully to his treatment and to other dogs in need of it. Well done to him!

Ippolito is a company rooted in city life, its creator has worked with Tsumori Chisato and has exhibited abroad yet her loyalty to Athens remains firm. Each leather item is crafted from high quality Italian leather in a workshop very close to the Athens store with meticulous attention to the stitching details.

The original Ippolito was itself in Plaka, the historic old city of Athens under the Parthenon. The present location in Voulis street eschews the manicured and sophisticated shopping hub of Kolonaki for a grittier part of town, faithful to its craftsmanship origins and its Greek base.