Marina Moroglou retains and offers to domestic and foreign markets the fresh honey she ate as a child, which had the taste of honeycomb

In January, I spent several grueling hours scouring the aisles of the food fair Expotrof, where the calories expended were more than off set by compulsive tastings induced by seeing so many delicacies displayed.

This is where I fell upon the Ermionis brand, encompassing a wide range of honies, sourced from thyme and other aromatic herbs, heather and carob. They also produce honey infused vinegar, coarse salt, herbal soaps and balms, as well as bee derived products. Soon, they will launch a beeswax ointment and a line of cosmetics. The sturdy honey jars have stylish labelling and a characteristic engraved metal bee sealing them. 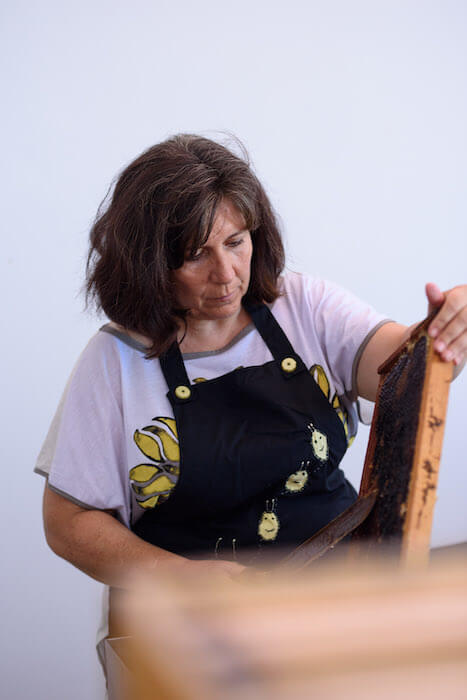 Carob is the rarest variety of honey, rich in calcium, iron, magnesium and vitamins. It enjoys a deep dark caramel colour and crystalizes slightly, giving a soft, coarse texture. While other plant sources of honey such as lavender are self-pollinated, carob honey is only available through commercial farming.

During autumn, the male carob sprouts flowers with a strong odour to attract insects, while the female tree grows smaller aromatic flowers. Bees congregate to the male trees and transport the nectar and pollen to the female ones, which hence, produce carob pods. Carob, originating from the Mediterranean and possibly the Middle East, has always been used as a healthy substitute for chocolate and transported worldwide.

Its scientific name Ceratonia Siliqua derives from the Greek kerátion for small horn and the Latin siliqua for pod. The metric unit carat, derived from kerátion, refers to the practice of weighing gems and gold against carob pods! 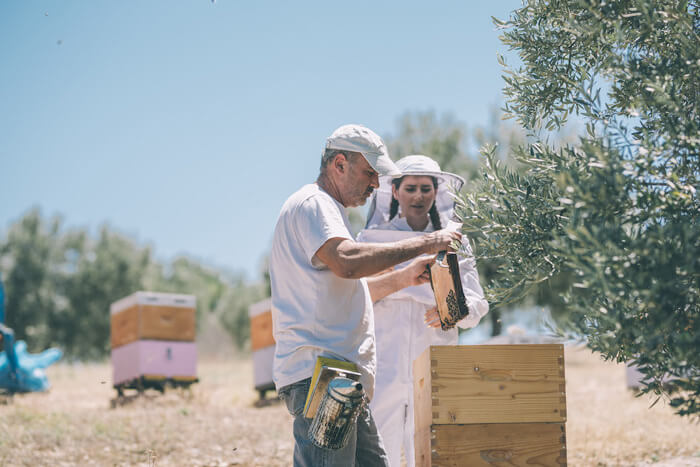 Marina Moroglou, who owns and runs Ermionis, studied Economics and then worked as an accountant. Her husband, Kosmas Bairaktaris, was a bank teller who also at the same time was consumed by the love of bees. He was a fourth-generation apiarist, continuing his family tradition from 1914. In 1993 he constructed the family farm, where the bees are raised and the herbs cultivated.

Bolstered by this experience, they decided to develop an enterprise in 2007 by establishing the first honey and herb business in Kranidi in the Eastern Peloponnese. The following year Ermionis was crowned as a brand.

The Bairaktaris apiary produces honey to the highest standards of purity, obtaining food safety certificates and being authorized as an organic product. Marina remembers that the honey she ate as a child had the taste of honeycomb in it. This freshness is what they seek to retain and offer to domestic and foreign markets.

A unique feature is the museum which from 2009 has immersed visitors in the hierarchical and industrious world of bees displaying the preserved apiculture tools of Kosma’s family.

Marina remembers that the honey she ate as a child had the taste of honeycomb in it. This freshness is what they seek to retain and offer to domestic and foreign markets 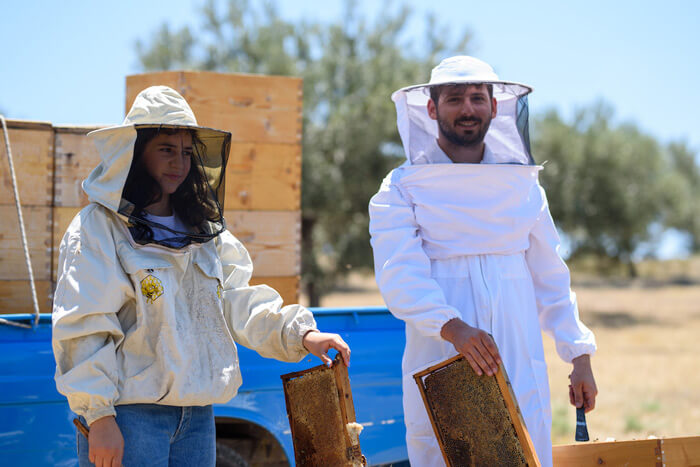 The etymology of Kranidi is attributed to the word Koronida, meaning the most impressive one. The area of Ermioni is famous for its gentle warm azure waters, the sun toasted ochre stone which gives a rustic beauty to the houses and its orange orchards, olive groves and luscious gardens. Its growing popularity with tourists or famous foreign home owners offers the Ermionis honey company a solid commercial present and future. Their gorgeous, amber coloured honey well deserves them.